Celebrating 10th anniversary of Samsung W series, Samsung announced the new first ever flip phone with dual screen at an event held in China. It was a special occasion for Samsung as Samsung completes its 25 years of business in China. The event was held in Xiamen, China. With a clamshell elegant design spotting the Samsung W2018 comes with metal framed 3D glass.

Samsung W2018 comes with dual 4.2-inches super AMOLED display and a resolution of 1080p full HD. On the inner side of flap, it is featuring numeric keypad for navigation with a directional pad.
The Samsung W2018 runs on new Snapdragon 835 processor and performs on 6GB RAM and has 64GB or 256GB storage options. Samsungs W2018 is introduced with two variant ; Extreme Edition with 64GB storage and 256GB storage namely Collector edition.

As per the cameras, Samsung W2018 is equipped with 12MP rare camera with 1.4 mpixels. With f/1.5 and f/2.4 aperture built in sensor , makes it sharp to click the photo in low light and daytime as well. Additionally, it has image stabilization (IS) with 4K video recording support and has dual-pixel auto focus.
On front, Samsung W2018 has 5MP f/1.9 aperture selfie shooter. 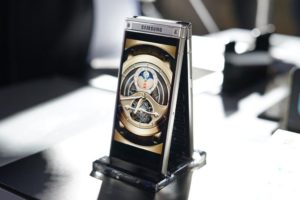 On the back panel of the Samsung W2018, just besides the rear camera it has finger sensor. The W2018 will be the first flip Smartphone to introduce Bixby, the voice assistance services like Google assistance. The AI of the Smartphone will be supporting Chinese language as well.
The phone is introduced in only black color for now. However later two more color variant will be introduced – Elegant Platinum and Gold, with limited edition.
In china, Samsung W2018 will be marketed and sold by China Telecom. The price is expected to 15,999 Y.
The Smartphone will also be available through JD Mall and TMall in China.