What is so special with new song released by  Daddy Yankee that made it so popular over night. Was it Luis Fonsi the Artist of the song or the Justin Bieber who remixed the song. In this article we will go through a deep investigation, describing all the facts about this mega hit, award winning song Despacito. Despacito the song topped the charts of 47 countries and reached the top 10 of ten others.The song was released on March 17, 2017 in solo pop and a salsa version both.

» According the artist Luis Fonsi, the word ‘Despacito‘ means slowly.

» It’s easy to imagine the popularity of the song- Despacito as by now this song has got over 23 Million likes. Most of the big music channels on Youtube don’t have such  huge number of views including all songs.

» After the viral popularity if the song the 23 years old Popular super star Justin Bieber called Luis on 27 February 2017 at 2 A.M. mid night and asked him that Justin heard the song Despacito Yesterday and now he wants to sing the song. Glad to know , Luis asked Jusitn to translate the song in English but Justin insisted to sing it in Spanish only, the native language of the song.

» Despacito is the first ever song sung by Justin in Spanish.

The girl featured in the song, Zuleyka Rivera, Miss Puerto Rico Universe 2006 and Miss Universe 2006, debut as a telenovela actress in Mexico’s Telemundo.

ORIGIN OF THE SONG DESPACITO

» As per the origin of the popular track Despaciton, the artist of the song Luis Fonsi told in an interview that one day he woke up in the morning with a single word in his mind ‘Despacito‘ and nothing else.

» Later on in the afternoon he met Erika Ender, the famous song writer of Panama. Luis asked Erika to write lyrics for Despacito.

» Surprisingly, the lyrics was done till the evening same day.

» Later, Luis called Andre Torres and Mauricio Rengifo, producer of the song and requested them to listen the music.

» The Guitar used in the song Despacito is cuatro guitar from Spain,you may have noticed the guitar at the very beginning of the track.

» The music played at the start of the track is a famous traditional music of Puerto Rico. Luis wanted it to be a mix of traditional and pop music.

» The moment, Luis realized something is missing from the song , he decides to feature Daddy Yankee a famous Puerto Rican singer, writer and rapper, to Rap in the song Despacito.

As every popular stuffs now a days has their own controversy, So the song Despacito has. The song is banned in Malaysia. As per the Malaysian public, the lyrics is not suitable for Islam. Islamic countries have their bizarre logic. 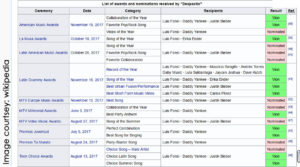 » The song Despacito is the highest ranking song on the  Hot Latin Song Chart.

» RIAA(Recording Industry association of America) has awarded the song Despacito with Platinum Award.

» In Australia, Hungry, Russia, Mexico, France and other Countries , this song is listed as top hit of the year.

» National syndicate has awarded the song with Diamond Award.

What is the fact you know about the song. Fell free to tell us in comment box below. Also don’t forget to share this with your friends by clicking on the respective social media button below.