6 Upcoming Feature of WhatsApp Coming Soon See Now!: WhatsApp the most used Instant Messaging App is coming with some exciting features you should know now. Some of them are still available for beta user. In order to avail these features try updating your WhatsApp and enjoy.

Here I have collected a list of top 6 features Whatsapp is planning to introduce with it’s upcoming updates.

According to WABetaInfo, a websites which keeps an eye on every news of WhatsApp has recently posted some features of WhatsApp messaging app you can soon get with WhatsApp updated on Android and iOS as well. Some of the feature are still available for beta users only. Once the testing is over it will be introduced for general users.

Sharing your WhatsApp number is quite frustrating , Ok , at least irritating right?. But, its a time taking process. You need to save the number in your phone directly and then you can send them message. However there are Several methods to send WhatsApp message directly Without saving the number.

WhatsApp is finally on the way to change it’s traditional look to Pitch Black. This new look is inspired by YouTube. This is the most waited feature of WhatsApp.

You can read a detail story about WhatsApp Dark Mode. WhatsApp Rolling Out Dark Mode With New Update, First Look

Now here comes the most hated feature of WhatApp. This feature displays the media directly on notification bar. Currently when someone sends you are photo or media.You will get the notification without preview. In order to see the photo or media you need to open the messenger.

The Story of Most Disliked Video on YouTube Rewind 2010-18

But, this feature may be embarrassing for you specially when you are a member of some Adult group. This will allow you to preview any media directly via your notification tray.you can simply swipe down on the message and view the photo, video or audio sent to you without opening the app itself.

When you get a video link of YouTube or other video sharing platform on WhatsApp. If you click the link, it will instantly open the app and play the video. But this PiP feature of WhatsApp will allow you to preview the video directly on the chat screen of  WhatsApp without redirecting to app. 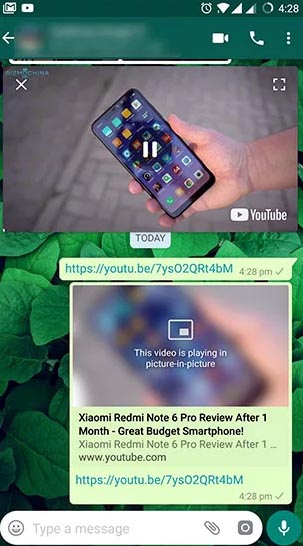 You can watch the YouTube video in a box hovering over the chat window, saving you multiple taps on the recent button. This feature is already rolled out for Beta users on iOS and Android.

Soon WhatsApp calls may get Banned in India

WhatsApp will soon change this behavior by introducing a standalone button for making group calls, but only in group chats. Simply tap on the button, select the friends you wish to call and then select if it will be voice or video call. This feature also showed up only in the iOS beta version of the app (v2.18.363).

The new feature allows automatic queuing of voice messages. All you will have to do is to tap on the play button and WhatsApp will play all the voice messages in a row for you. This feature was spotted on WhatsApp beta for iOS (v 2.18.100) and is only present in the code of Android Beta version (v 2.18.362) which is likely to be enabled remotely.

Here was the list of all the latest updated of WhatsApp they are going to introduce soon. Which feature you like most, just feel free to comment below.

Get updates from WhatsApp, Facebook, Smartphone, Trending news from Entertainment and Technology industry. Make sure to subscribe our feed.